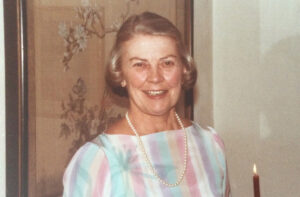 Eleanor Groel passed away peacefully on February 1, 2022 at the Henrietta Brewer House in Vineyard Haven where she lived for the past few years. She was only two months away from her 101st birthday.

She was born Eleanor Adelaide Mencke on April 8, 1921 in Philadelphia, Pennsylvania to John William Henry Mencke and Eleanor Alsop Mencke. She graduated from Westfield High School in Westfield NJ and remained friends with many of her classmates.

Ellie, as her friends and family knew her, graduated from Smith College in 1942. When the war started, she joined the Navy Waves, becoming a lieutenant (jg). She thought her assignment would be to a distant post. Instead, the Navy first sent her to Northampton, Mass. for basic training, a few blocks from Smith College.

She was assigned to the Brooklyn Navy Yard where she met Lt. Gordon K. Reese and they were married on February 14, 1944. The Navy reassigned Lt. Reese to Long Beach, California, where their first child, Gordon K. Reese Jr. was born. The adventure came when General Motors, Gordon’s post-war employer, sent the young Reese family to South Africa for four years.

Back in New Jersey, Ellie became a full-time mother to Gordon and Sally, born in 1950. She was a Cub leader and scout and always found time for volunteer work. She loved books and worked for several years in a friend’s bookstore. After a few math lessons, she decided to teach full-time and did so for 20 years at Westfield, while earning her master’s degree.

The family first rented on Martha’s Vineyard in the summer of 1950, and camp at Chilmark Pond was a second home for 25 years. Ellie took on everything vineyard, from fishing and clam digging, to battling the daily crossword on the beach at Abel’s Hill. She played golf for many years, but tennis was her love and she played until her mid-eighties.

At that time, the husbands came mostly on weekends and she had a lot of fun at her ladies’ friendly hour or around the bridge table. In 1975, her then son-in-law, Richard Anderson, built her a classic post-and-beam house on Abel’s Hill, where she enjoyed entertaining for many years. Today it is the home of her granddaughter, Elizabeth Anderson Moriarty, her husband, Tim, and their three children.

After her first marriage ended, Ellie met and married Campbell C. Groel in 1983, merging two families, many mutual friends and a love of the vineyard. Ellie’s retirement from teaching freed them up to travel, including to Europe on the Queen Elizabeth II and back home on the famous Concord. They began dividing their time between Campbell’s home at Llewellyn Park in West Orange, NJ, Vero Beach in Florida, and, of course, the vineyard. Eventually, for the last 25 years of their active retirement, it was Vero Beach in the winter with many friends from Vineyard and Campbell’s old classmates in Princeton, and the island every summer. For many years, her daughter Sally has gone to Vero Beach in April to share their joint birthdays on April 8. A particularly memorable month of April was the celebration of Ellie’s 80th birthday.and birthday with extended family in Florida.

On the vineyard, Ellie volunteered at the Polly Hill Arboretum and she and Campbell were members of the Edgartown Yacht Club and the Edgartown Golf Club.

The family would like to thank the late Elizabeth Sandland of the old Long Hill in Edgartown, where Ellie lived for several years, enjoying excursions ranging from late afternoon movies to lunch dates. They are also grateful to the carers at Henrietta Brewer House who allowed Ellie to stay on the island and receive care like at home.

Ellie was predeceased by her husband, Campbell Groel, in 2005, and her first husband, Gordon Reese, in 1999, as well as her brother, John Bernard Mencke. She is survived by her son, Gordon Reese Jr. and his wife, Laurel Walker, of Green Valley, Arizona.; her daughter, Sally Anderson and her husband Steve Flanders, of West Tisbury; his three granddaughters, Allison Myers and her husband, Ed, of Folsom, Calif., Mandy Crabtree of Sacramento, Calif., and Liz Moriaty and her husband, Tim, of Chilmark; and his seven great-grandchildren, Reese and Sean Crabtree, Matthew and Julia Meyers, and Finn, Maeve and Cormac Moriaty. She is also survived by her two stepsons, Peter Corbin and his wife, Lillian, of Millbrook, NY, Hunter Corbin and his wife, Jeanette of Fair Haven, NJ, and their 4 children and 7 grandchildren.

A memorial will be held at a later date.

Exclusive news and research on the wine, spirits and beer industry