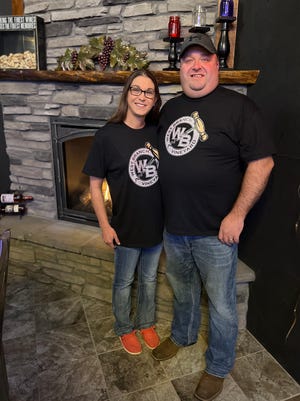 Trig Viessman grew up in the trucking industry, with his grandfather Cliff Viessman founding Viessman Trucking, which is still family owned and operated. Having been in this business all his life, Trig might never have imagined years ago that one day he and his wife Sara would own a vineyard and a bar. Gardening has always been a hobby for them. “I was really successful in growing, and a friend of mine from high school who was into winemaking in New York said I should put some vines, so I put 100 and they just sprouted like wildfire. “, says Trig.

That’s when he says he started thinking about new ideas for his property. “Once my grapes started growing, my gears started turning, and I thought about what I could do to take advantage of that,” says Trig. In the mid-2010s, the wine business began, and over the next few years the couple worked to expand their harvest. They had some successful harvests which they sold to Grandview Valley Winery in Belview. In the sixth year of growth of the original vines this year, they anticipate a good harvest. “Right next to 300 vines [in one area of planting] last year I had five thousand pounds,” he says. Other areas of vines planted over the years will also catch up in age to the well-productive original field over the next two years, providing an even larger harvest over the next few years.

Varieties include Frontenac, Itasca, Frontenac Gris, Frontenac Blanc and some Bluebells. Originally, they planned to produce and bottle their own wine. So the couple bought all the equipment to do it and built a piece on a Quonset that existed on their property. However, as Trig did more research, their plans changed. “I started reading and discovered that 90% of my sales came from a tasting room. So I built this room, then I decided it wasn’t big enough, so I added another room,” he says.

As their plans evolved, the decision was made to open a bar on the property that would serve local Minnesota wines and beers as well as a full bar with beers and cocktails. “I thought when I can get someone else’s best wine and sell it here, it takes a lot of the work out of it and you know you have a good product that will keep people coming back,” says Trig. Sara adds that one of their star wines will come from Millner Heritage Winery, where owner John went to school to become a winemaker. “I tell myself that if he buys my grapes, I should buy my wine from them. In March, I’ll be able to sell you a bottle of wine with my grapes in it, and that’s pretty neat,” says Trig.

Since 2018 the couple have been working on building around the Quonset, using as many local contractors and suppliers as possible for building products. Part of the construction was delayed due to the need to find a source of water that would pass after a newly installed well failed. “I decided to go with Rural Water and it took almost a year to get Rural Water here. I couldn’t get any of my permits until I could get the water through,” Trig said. Over 150 people helped in the time spent building, including Dawson’s T&D Barnwood, who built the feature wall behind the bar, bar top, tables and tabletops, swing doors and more again from repurposed barn wood from an 1800s barn. “This wood was transported by horse and buggy through Montevideo in the 1800s,” Trig explained. “They put a lot of love into the work,” adds Sara. Trig says everyone involved was the best around. “Dawson, Montevideo, Madison, Boyd – we stayed local where we could and everyone who helped was just the best of the best,” he said.

The renovated Quonset now includes a tasting room, a small kitchen, an office, a back room which was originally intended to be the winemaking room which will eventually be reused for sales and a loft. The loft includes televisions, tables and sofas. “It would be a great place for people to watch the Vikings game or the Super Bowl or whatever they like to do,” Trig says. “It turned out there was a lot more space than I expected. I think it will accommodate 99 people. There are also outdoor spaces where, weather permitting, you can sit on a terrace and enjoy wine near the vineyards. “I’ll probably build a fire pit there too, eventually, so we can start a fire on a cool night,” Trig says. The indoor space also includes a fireplace, darts, prize games for children, drawbars and a jukebox.

Alcohol served will be a full bar, including Minnesota wines and beers. “In our wines, we are going to have anything, sweet wine, semi-sweet wine, then dry wine. We should have something for everyone. We also worked with Mike Jacobs of Talking Waters to get some of their beer,” says Trig. “Now, instead of being a winery, we’re going to be a full bar, but we’re going to serve a lot of wine – some of the best wines made in Minnesota in our opinion.” Along with wines, including some award-winning, from Millner Heritage Winery in Kimball and Grandview Valley Winery in Belview, there will also be wines from Rolling Forks Winery in Glenwood.

The kitchen will serve Toppers Pizza, Harry’s Pizza, beef sticks, cheese curds from Redhead Creamery in Brooten and Bloody Marys. “We have a really good Bloody Mary recipe that won awards in Wisconsin,” says Trig. They also plan to do specials on multiple nights, offering variety outside of the usual cooking offerings, like BBQ night or taco night. They also plan to offer wine tastings, with samples of four of the low-priced wines to help customers find their favorites, as well as two-person deals and specials. “What we’re trying to do is put Minnesota wines on the map to let the rest of the world know that Minnesota can produce wines as good as anywhere else,” says Trig.

The couple named the operation West Branch Vineyard because the property is located along the west branch of the Lac qui Parle River. In the spring, they plan to work with the county to place signage on the highway. 212 and 75, but currently have posted signs along the driveway to let customers know they’ve found the right place. The Vineyard is located at 2496 160th Street in rural Dawson and will be opening soon. “We’re just waiting for our liquor license. We have already been inspected and approved and are just waiting for it to be signed. Once it’s signed, we’ll order our inventory and announce our opening,” says Trig.

They plan to have West Branch Vineyard open Wednesday and Thursday from 3 p.m. to 11 p.m., Friday from 3 p.m. to 1 a.m., and Saturday from 11 a.m. to 1 a.m. passes, we will be open during the winter for sure on Sundays as long as there is a game,” says Trig. The couple are posting all updated opening day information and offers on their Facebook page, which can be found by searching for West Branch Vineyard. “The best day, I think, will be when we open. That’s what we’re looking forward to,” says Trig.

Remarkable aging of wines made from the Tempranillo grape variety