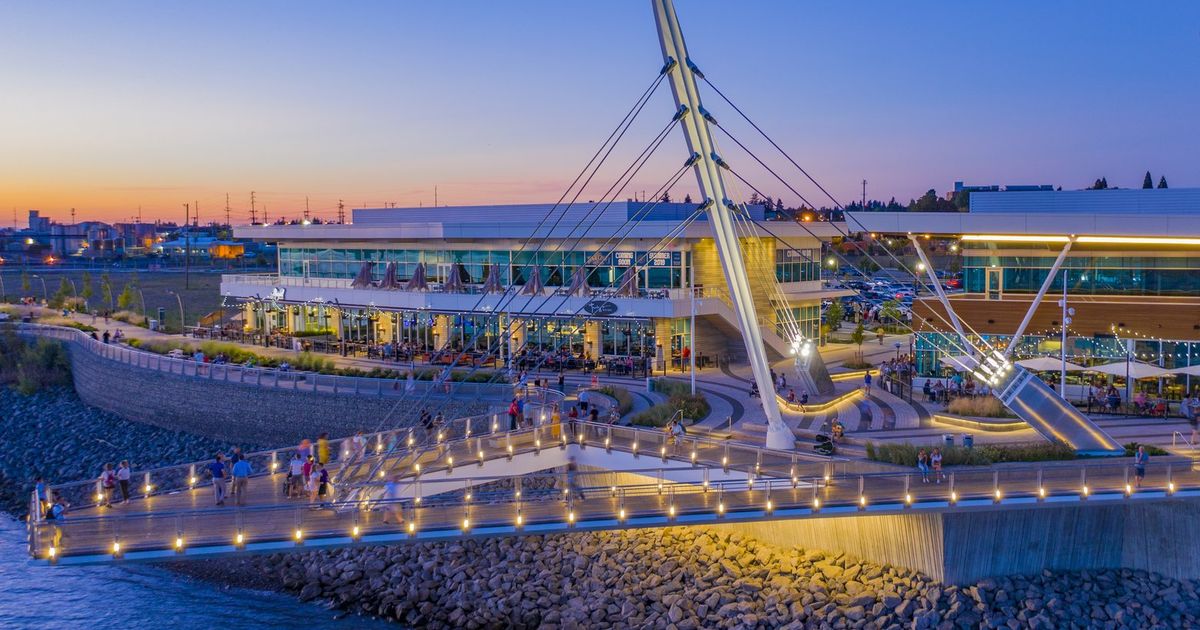 With new options for food, wine and rides on the Columbia, Vancouver’s waterfront is buzzing

VANCOUVER, WASH. – Sawmills, shipyards, breweries and a paper mill once lined the north bank of the Columbia River in “the other Vancouver,” the Washington town across from Portland that flourished with industry in the late 1800s .

Fast forward to a post-pandemic 2022. People walk their dogs and children play in a waterfront park flanked by restaurants, wine tasting rooms, a gourmet ‘gastro’ cafe and, later this year: two hotels; an El Gaucho restaurant and 13 Coins; a brewery; and another bar.

“It intrigued me from the start,” said developer Barry Cain, who led Waterfront Vancouver, a mixed-use project with office buildings and residences, for Gramor Development. When Boise Cascade decided to close its paper mill in 2006, leaving dormant 35 acres of prime waterfront property just south of downtown Vancouver, Cain saw the opportunity “to take a situation like that and do something that could change the face of the city. ”

A city-owned 7-acre park connects to the 8-mile Columbia River Renaissance Trail, popular for jogging and biking. Outdoor patios stand on the half-mile paved path at Waterfront Park, lined with granite benches, play areas and water features, separated by the Grant Street Pier, a suspended gazebo 90 feet above the river.

“Vancouver has always lived in the shadow of Portland,” says Seidy Selivanow, owner of Kafiex Roasters’ Gastro Café, which opened its doors last April. “Now he takes on an identity of his own.”

Home-baked pastries fill a display case in the airy Kafiex cafe, with outdoor tables overlooking the river and a cheery interior adorned with a mural evoking the landscape of a Mexican coffee farm.

The beans come from Café Femenino in Vancouver, which supports female coffee farmers around the world. On the menu are coffee-infused cocktails and, from the “slow bar”, siphon-style brewed coffee in glass jars heated by glowing red halogen lights.

Around the corner is Pop-Local, the new waterfront tenant. When the COVID-19 pandemic forced the temporary closure of entrepreneur Jessica Chan’s popular Night Market Vancouver, she brought the concept to the interior, transitioning to a farmer’s market style outlet for its vendors.

More than 80 manufacturers in Washington State and Oregon provide artisan products and foods that are produced within an hour’s drive of Vancouver.

On sale are items such as apple, maple and bourbon soy wax candles from Naty’s Candles; warrior-themed teas by veteran-owned Valhalla Tea; and the Mission Citizen cafe, with beans sold by local high school students to fund citizenship classes for immigrants.

A taste of the Northwest

With work progressing on both hotels and other buildings, visitors will find themselves avoiding construction and ‘Opening Soon’ signs.

Don’t be discouraged: nine tasting rooms owned by Washington and Oregon state wineries are scattered throughout the development. You will find your way.

“We went to Walla Walla and we were like, ‘We should really think about getting these guys here,'” Cain said. “Soon after, we were contacted by Maryhill [Winery]and it kind of continued from there.

The winery, located just west of the Maryhill Museum of Art in Goldendale, Klickitat County, opened the first, largest and most elaborate waterfront tasting room, a 5,000 square foot space with indoor seating and a patio overlooking the river.

The hefty tasting fee ($25, waived with a $30 bottle purchase) and pricey small-plate menu are a splurge, but the riverside location draws crowds even on cloudy weekdays. Coming later this year on the second floor of the same building is a Willamette Valley Vineyards tasting room.

Popular with flight attendants staying at nearby hotels, the smaller Airfield Estates, operated by the fourth-generation Washington farming family, the Millers, whose Yakima Valley ranch was used as a training school for World War II pilots. Old photos of flight crews decorate the walls of the restrooms. Hanging above a table in the tasting room is a vintage road sign advertising the farm’s sugar beets, corn, and peppermint.

Brian Carter Cellars of Woodinville offers an appetizing menu of snacks and wines served on small tables in a cheerful tasting room decorated in blues and yellows. Top picks are the pear and blue cheese flatbread paired with Carter’s Byzantium red; polenta fries drizzled with an Italian Tuttorosso; and chai bread pudding with Opulento dessert wine.

Dinner with a view

The Grant Street Pier, designed by artist Larry Kirkland to evoke the swell of a passing sailboat, is the focal point of several flagship restaurants with stunning river views.

Tables fill up after sunset when the pier lights are on. Afternoon happy hours are less busy and easier on the wallet.

My favorite spot was the second-floor bar of Dosalas Latin Kitchen, where my husband and I snacked on red wine and Cuban sandwiches at a window table while listening to the fog horns and watching the barge traffic.

The house specialty is a $19.67 candy packaged in a pint jar (you can keep the jar), stacked with toppings such as gold nuggets, a drizzle of peanut butter and Oreos crushed.

I found it hard to believe anyone would pay $20 for a milkshake, but General Manager Erek Watson took orders for six in 20 minutes during the afternoon we passed.

“In hot weather, the line stretches to the sidewalk,” he said, making the shop’s Old School Banana Split, a pound and a half of strawberry-banana pudding ice cream and other treats topped with a whole banana.

All the more reason to end a visit with a stroll along the Columbia River Renaissance Trail. Note that the connection between Waterfront Park and the trail is temporarily interrupted by construction. To reach it, you have to take a short detour along the sidewalk in front of the weathered sign of an old Red Lion inn.

On the waterfront, enjoy views over the Interstate 5 and I-205 bridges to Oregon and Mount Hood, with plenty of scenic stops along the way as well as a connection to Fort Vancouver National Historic Site. Take it all in, then drive home glad you finally made the time to stop in Vancouver.

Dos and Don’ts of Wine Appreciation