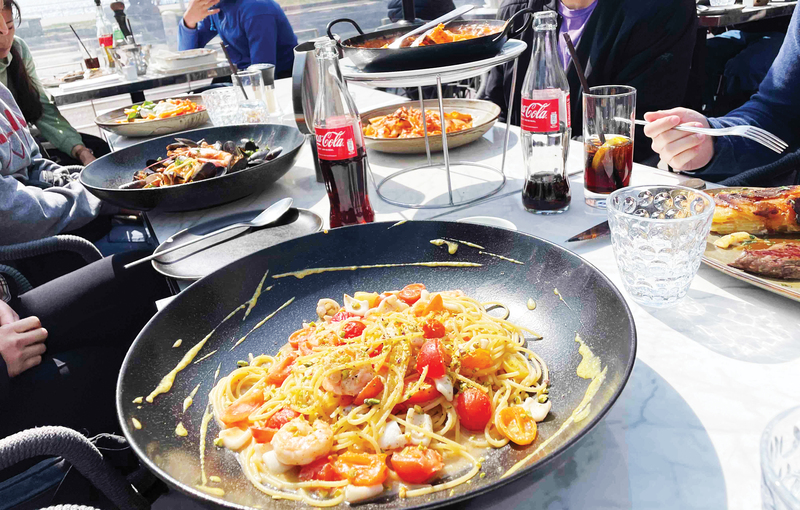 By Mindy Long and Tai Zheng

During spring break, we had the chance to visit Spain and the French Riviera, gorging ourselves on sangria, chuletón, churros and everything in between. We would like to share a summary of four restaurants and bars that stood out for us.

Our first meal in Nice, France was at a seaside Italian restaurant called Di Più. With views of pastel mountainside houses against the azure waves of the Mediterranean, we expected a meal as beautiful as the ambiance. Di Più did not disappoint. I ordered a chittara shrimp and a floating island for the lunch. Chittara shrimp was seafood pasta, about twice as thick as spaghetti, with prawns, calamari and Roma tomatoes and sprinkled with a spray of pistachio crumbs. The dish was served on a large black ceramic plate that looked more like a shield than a dinner plate. The pasta was perfectly cooked – al dente – and the prawns and calamari were tender and flavorful. The tomatoes ensured the pasta was not dry and provided a natural sweetness, while the pistachios added a slight crunch and uniqueness to the dish. The floating island was a traditional French dessert consisting of meringue floating on custard. The meringue was extremely light and the cream left no trace of its egg origins. The meringue was also sprinkled with popcorn, which in turn was lightly drizzled with caramel. The floating island was surprisingly low in sugar and rather very light, making it the perfect ending to a fulfilling meal.

Tai bet on the dish of the day. Many French restaurants offer a special plate of the day depending on the ingredients they are able to source. His bet was rewarded with a perfectly grilled, medium-rare cut of lean steak with grilled au gratin potatoes. The portions weren’t as impressive as other Di Più dishes, but the flavor and freshness of the ingredients made the dish satisfying. For dessert Tai doubled down and tried his luck with ice cream and coffee dessert thinking it was affogato. Out came a single espresso and a mini chocolate covered ice cream bar. The homemade ice cream tasted like anything you could get from an American ice cream truck. However, the espresso cup did not disappoint. Its richness and smoothness was something we grew accustomed to in Europe, and our frequent visits to cafes across the continent kept us going.

In Madrid we sampled a wide range of cuisines from all over Spain. On our second night in town, we secured a reservation at La Bola, a restaurant known for its traditional cocido madrileño, a chickpea-based stew with chicken, chorizo, pork belly, and pasta. The dish itself was an experience. First the waiter brought an empty plate and another filled with soft white pasta. Then he presents a mysterious ceramic jar, from which he pours the golden broth into the pasta plate. Finally he removed the lid and all the meat and chickpeas inside cascaded down onto the empty plate. The soup and pasta allowed the taste of the cooked meat to shine through the clean and simple broth. The meat and chickpeas were tender enough to fall apart on the slightest touch; they provided a comforting and hearty ending to the dish. The balance of sangria at La Bola made it the best we had in Spain. We could taste the deep wine flavor in this sangria, but the fruitiness still dampened the expected bitter notes. For dessert, we ordered La Bola’s buñuelos con helado, or apple fritters with ice cream. The donuts were deep fried and coated in caramel, with two scoops of ice cream on the side. The warm and crunchy shells contrasted well with the cold vanilla. It was Tai’s favorite meal of the trip.

On our last night, we dined Andalusian tapas at the Alhambra, a tavern in the heart of Madrid known for its boisterous atmosphere and generous portions. Already stuffed after days of incessant eating, we ordered three dishes to share: platazo de ibéricos, rabo de toro estofado and tapa pisto con bacalao. Platazo de ibéricos was an Iberian charcuterie board, including ham, pork, beef, chorizo, and manchego cheese. Surprisingly, it was our first taste of jamón ibérico during our stopover in Spain, so we decided to try an assortment of jamón that evening. The manchego cheese, creamy and not too salty, was a perfect complement to the savory jamón, our collective favorite being the ham. Rabo de toro estofado, or oxtail stew, was served with fries. The oxtail was covered in a flavorful sauce and the tender meat fell off the bone easily. Finally, the tapa pisto with bacalao, a supposedly smaller tapa dish of smoked cod, capped off our last meal in Europe. The dish was technically a tapa degustación, which meant that the dish would be served on small slices of bread. The cod arrived on the pisto and bread and was drizzled with a sweet local vinegar. Pisto is a dish originating from the region of Castilla La Mancha, where Madrid is located, hence the official name pisto manchego. Similar to ratatouille, it consists of tomatoes, onions, eggplant, red peppers and olive oil. The fresh, sweet cod pairs well with the slightly sweet pisto and was a smash hit among our table. The sangria here reflected the difference between eating at a tapas bar and the historic La Bola. The drink was fruitier and brighter than the more sophisticated La Bola. However, the sangria always paired perfectly with the food and a single pitcher proved insufficient.

Later in the evening, we decided to order cocktails to celebrate the end of the trip. After bar-hopping for the best and most affordable drinks, we ended up at Serafina, where we ordered the Cosmopolitan, the mojito and the caipirinha, along with croquetas jamón iberico, ham croquettes and cheese, to share. I ordered the Cosmopolitan, a cocktail of cranberry juice, vodka and contreau. The juice was watery and not very sweet so for my next drink I ordered the caipirinha. The caiprinha is the national cocktail of Brazil and consists of cachaça, lime and sugar. This drink was refreshing and mixed in such a way that only a hint of alcohol could be detected, the taste blending well with the lime and sugar. Tai ordered a refreshing mojito; the mint, lime, and sugar did a great job of masking the tequila taste. The salty and greasy croquetas were the perfect thing to snack on while we enjoyed our drinks.

The food and drink throughout the trip proved to be the perfect respite from travel and sightseeing. While we rested our weary bodies, we were still able to discover the sights, smells and tastes of the region. These four restaurants showcased the diverse experiences we’ve had in Spain and France, and we’d love to hear recommendations for other travel-defining restaurants around the world!