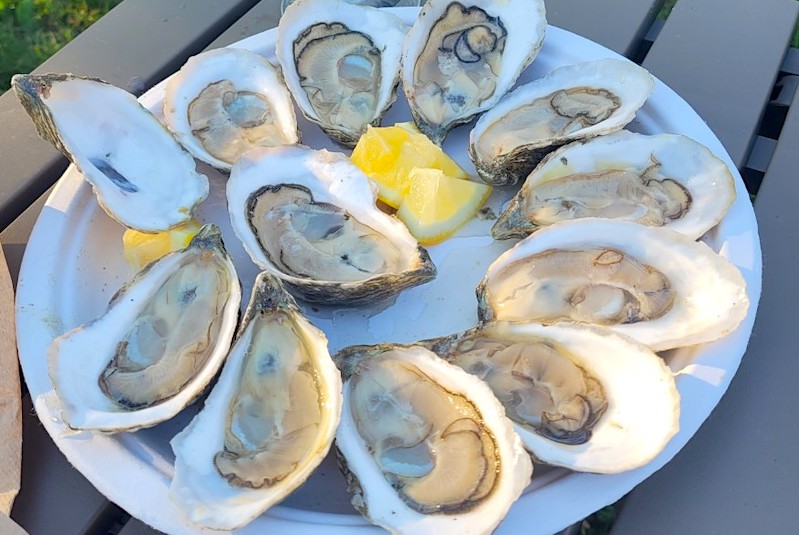 O Oysters, come and walk with us!

Oysters, come walk with us!
The walrus pleaded.
A pleasant walk, a pleasant conversation,
Along the brackish beach:
We can’t do with more than four,
Give everyone a hand.

This stanza is found in one of my favorite poems, “The Walrus and The Carpenter” by Lewis Carroll. The main theme of the poem is an uplifting tale urging us not to blindly follow the rulers, as evidenced by the cunning betrayal of the oysters by the walrus and the carpenter, who trick the young oysters into following them on the beach until the oysters are tired and can be easily eaten. However, in my chef’s mind, it’s also a warning to spread the butter that’s too thick on bread while enjoying my favorite bivalve shellfish.

It seems a shame, said the walrus,
To play such a trick on them,
After we’ve taken them out so far,
And made them trot so fast!
The carpenter said nothing but
The butter is too thick!

I recently enjoyed a beautiful fall day at Home Range Winery in Canaan, New York, where Peter Bartlett and Susan Powell have, in a relatively short period of time, started making some very nice and friendly wines from of grapes grown on their property. I had a lot of “meh!” a few moments and a few â€œugh! Moments with wines made from local grapes in the Northeast, with the exception of some of the excellent wines from New York’s Finger Lakes region. Many of them are too sweet or less good representations of European wines. I have tasted all of the Home Range wines and there was no â€œugh! ” among them. Peter has successfully started producing honest dry wines that allow the grapes to shine cleanly and dare I say to wine snobs who read this article, reflect their terroir. Put simply, these are nice examples of simple rustic wines meant for a picnic or a drink or two at home, with the benefit of being locally sourced and produced. Well done, Peter and Susan!

The couple have held events at their idyllic farm and vineyard on the weekends – featuring local musicians and food vendors – and that will continue throughout the fall. The weekend Lois and I visited, Susan texted me that half-shell oysters were on the menu, which was the deciding factor in finally making a visit. The Amy Ryan band rocked, helping to create a party vibe as we enjoyed a glass of wine with a dozen oysters, expertly scaled by Scott Soares of his eponymous company, Scott Shucks of East Longmeadow. You can ask what East Longmeadow has to do with oysters and the answer is Scott Soares.

Not only did I really enjoy Scott’s oysters in the waters of Nantucket Sound off Barnstable on Cape Cod, but I discovered that he had a wealth of knowledge about their aquaculture. His interest in seashells began while growing up in Dartmouth on the South Shore of Massachusetts, where he spent a lot of time on the plains at low tide collecting various seashells with his family. After graduating with Distinction from the University of Massachusetts at Dartmouth with a double major in Biology and Marine Biology, followed by a stint in the military, Scott was the Aquaculture Coordinator in the Massachusetts Department of Agricultural Resources. before finally being appointed Massachusetts Commissioner of Agriculture by Berkshire County. own former Governor Deval Patrick. Scott is an oyster nerd in every way.

One of the interesting aspects of oyster farming that we discussed was the restoration of oyster reefs. There is a fascinating project taking place in and around New York Harbor called the Billion Oyster Project. This project is restoring the oyster reefs in the harbor after they were all but destroyed in less than 100 years. Its main purpose is to protect New York City from storm damage by dampening the blast of large waves, thereby reducing flooding and preventing shoreline erosion. Since 2014, the project has restored an incredible 47 million living oysters to create these reefs. It doesn’t take long to realize how the scientific research of this project already has global implications in our fight against the effects of global warming. As the Earth’s ice caps melt, they raise the level of our oceans and coastal storms continue to intensify.

An added benefit of the Billion Oyster project is that it helps clean up the harbor waters. Oysters are filter feeders, extracting organic matter through their gills from the waters around them. One of the most important environmental benefits of oyster filtration feed is removing excess algae from the water column, which, if left unchecked, can create algae blooms (tidal red) responsible for introducing toxins into waters and destroying marine life. Considering that a single adult oyster can filter up to 50 gallons of water per day, I don’t think anyone needs to do the math to imagine the effect 47 million oysters have on the harbor.

Let’s talk about oysters as my favorite subject: food.

An interesting fact that I discovered during my research is that since the oyster anatomy does not have a central nervous system, it does not experience any pain. For this reason, some vegans will eat them. This is not an argument to convince vegans or vegetarians that they have no philosophical position when it comes to excluding oysters from their diet; to each his own as far as I am concerned. I just find it interesting, and it can allay the fears of those who think eating a live shellfish is cruel and are disgusted for that reason.

I would like to share some highlights from my conversation and interview with Scott Soares regarding oysters and oyster farming.

When it comes to the safety of raw oyster consumption, oyster and shellfish farming is a highly regulated industry at the local, state, and federal levels. The National Sanitary Shellfish Program is a cooperative agreement between state and federal regulators, setting standards that are enforced by those regulators. These standards include regular monitoring of the water quality where oysters are grown and labeling oyster bags with information on when and where they were harvested, thus making it possible to trace any problems. arise. Restaurateurs and seafood retailers are required to retain these labels for at least 90 days.

When buying oysters buy them from a reputable fishmonger, make sure they smell as good as the ocean breeze and the shells are completely closed. From there, the most important thing is to keep them in the refrigerator on ice. They keep best at 35-40 F. Do not deprive any shell of air because they suffocate. Oysters are best eaten frozen, so it is best to keep peeled oysters on ice as long as possible.

The old directive to eat oysters only during the months ending with the letter R made it seem like there was something dangerous about eating them during the warmer months. Prior to the mid-20th century, when extensive refrigeration was not available and safe distribution was an issue, it could have been true. The hottest months are also those when algae blooms occur, which can contaminate shellfish populations. However, extensive refrigeration and fast, safe dispensing are now the norm. Additionally, as noted above, regular water testing where oyster farming is practiced virtually eliminates waterborne contamination of oysters.

Another problem is that oysters typically spawn during the warmer months of May through August, which can affect their flavor and texture. The difference, however, is slight and would only be noticed by a true aficionado. That being said, oysters are at their peak when it comes to flavor and texture as they prepare for the winter months. Scott said to think of it like bears stuffing themselves as they prepare for hibernation.

When it comes to condiments, the most I add to an oyster is a drop of lemon, but Scott made a good point for enjoying them without any condiment. His point was that in order to fully appreciate an oyster, it is best to be able to fully taste where it comes from and all the conditions that contribute to its taste and texture. In wine, terroir, or things such as soil conditions, temperature variations, and the amount of sunlight, is vitally important to grapes. A qualified winemaker will highlight these qualities. In French, sea means sea, so for oyster lovers the term merroir is used to describe how an oyster is affected by where it is raised. The difference between terroir and merroir is that the oyster merroir is even more important for its smell, taste and mouthfeel, because the oyster is not processed at all and is consumed directly from the ocean.

I have learned that oyster farms offer more and more economic and employment opportunities for coastal communities affected by changes in commercial fishing. I have known from my time as a chef on Cape Cod that the once thriving commercial fleets that fished in Provincetown and Chatham are now virtually nonexistent. Meanwhile, farmed oysters, which were previously a minor player in the seafood industry, now rank third behind lobsters and sea scallops, with an estimated economic impact of $ 60 million in the Massachusetts.

Are you intimidated by oyster shelling? You only need two pieces of equipment: a good oyster knife and a tea towel. Here’s a short video from the good people at America’s Test Kitchen that will teach you everything you need to know.

Finally, I leave you with a quote and the last stanza of “The Walrus and the Carpenter”.

â€œBefore I was born, my mother was in great agony and in a tragic situation. She could only eat frozen oysters and champagne. If people ask me when I started dancing, I say ‘In my mother’s womb, probably because of the oysters and Champagne.’ ” â€”Isadora Duncan

oysters, said the carpenter,
You had a pleasant race!
Are we going to trot home again?
But the answer did not come at all –
And it was hardly strange, because
They had eaten everyone.