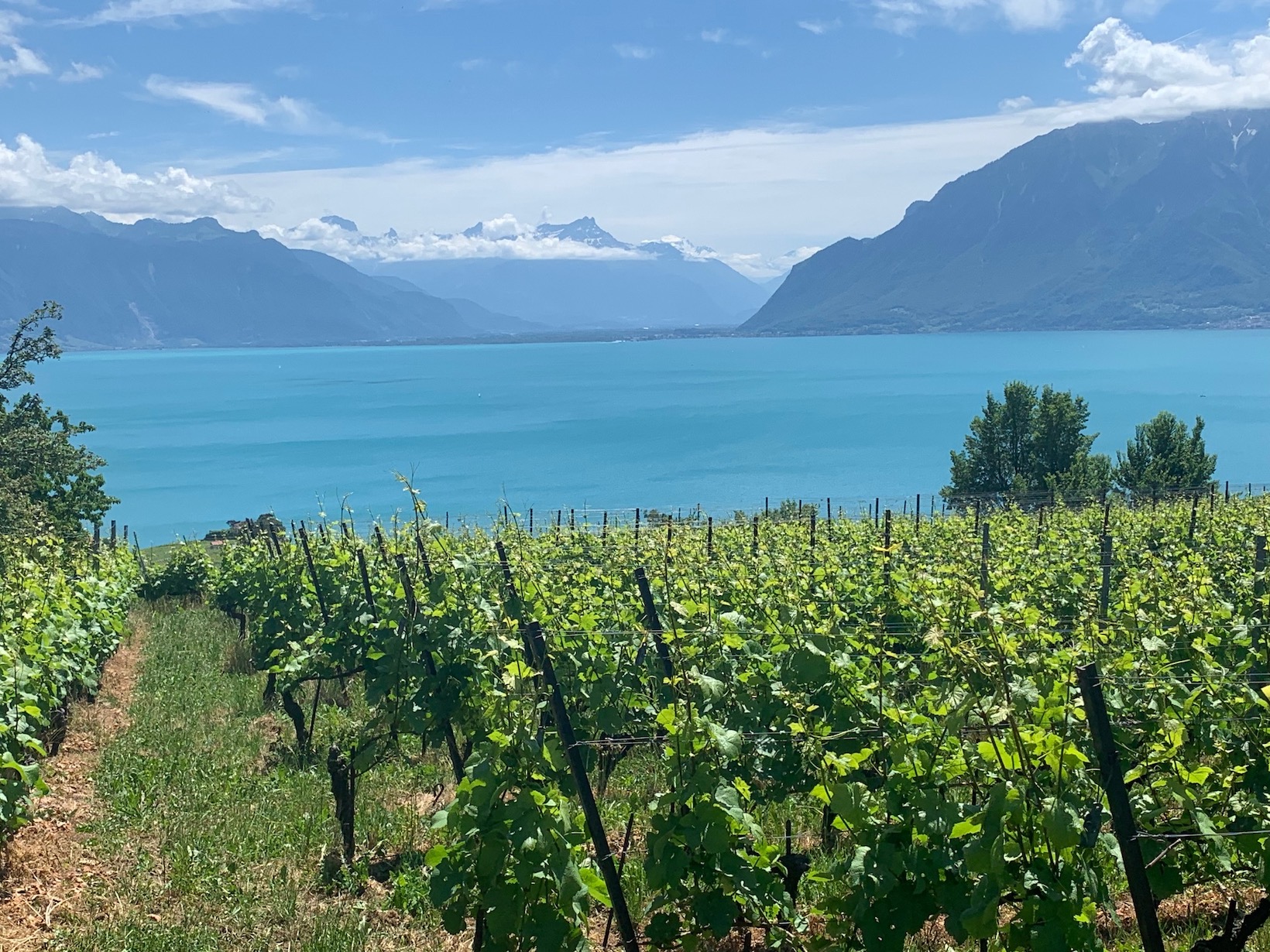 You would think that 40 years of living in the same neighborhood would dull the senses; make local beauty and generosity invisible. But the Lake Geneva region, shared between Switzerland and France, is exceptional. I have lived in the area for 40 years and still find adventure and surprise in the historical, cultural and culinary possibilities.

Lake Geneva is the largest lake in Europe. It is surrounded by some of its largest mountains and almost all of the sloping hills that rise directly from the lake are covered in vines. The area has everything – especially for a skier, cyclist and wine lover – to keep you interested for a lifetime.

A lake tour by bike is 180 kilometers and is possible to do it in a day trip (organized or not). But what a shame, because the riding, while extremely beautiful, is mostly flat, and so much is missing by not exploring the vineyards, hills and mountains surrounding the lake.

Time is very well spent biking in each of the main wine regions around the lake; three in Switzerland and one in France. If you take the roads less traveled, you will find everything you are looking for.

1. Geneva: the city itself

This historic Swiss town is surrounded on all sides by vineyards and rolling hills that rise to the foothills of the mountains – and in the distance, the tallest mountain of them all, Mont Blanc.

Cycling through the vineyards of Geneva is done on narrow roads but with little traffic. It’s best not to mix cycling and sipping, but rather allow the morning activity to build an appetite and appreciation for the terroir that you can tap into later in the day.

A circular tour could start in Hermance, which is by the lake and on the border with France. Continue to Jussy passing in front of the Crest Castle. Book this place for a tasting later in the day. Continue along the vineyard roads to Dardagny, and here you pass in front of the Domaine de la Roche 1859 – note that for later in the day, too. Continue through Satigny, Meyrin and Ferney Voltaire, passing several winemakers all worth a visit. Note the location of the Voltaire Castle and be sure to return with some time to visit and catch up on the fascinating story of the writer and enlightenment. Descend back to Lake Geneva and continue along the beautiful lakeside to complete your loop at Hermance.

Pro tip: If you are in Geneva in May, you should join the multitude of other wine lovers for the Open Cellarsday of celebration when most of the Geneva wine cellars open their doors, and their barrels, to visitors.

2. The hillside of La Côte

La Côte is a hilly coast stretching from the outskirts of Geneva towards the next major Swiss city of Lausanne. It has vineyards throughout, with forests at the top and wonderful cycling along the entire length of the coast. It offers wonderful views of the lake below and of the mountains, including Mont Blanc, rising on the other side of the lake.

It is also the gateway to a cycling paradise in the Swiss canton of Vaud. It is a region to be discovered along the lake or higher up in the vineyards. In the evening, after feeling the majesty of the place, choose one of the many wineries along the way to visit for a tasting.

The art and tradition of viticulture dates back many years, and modern technologies and methods are sometimes better balanced with more ancient techniques. A visit to The Dove (La Colombe) is an inspiring example of the mastery of ancient (biodynamic) alchemy and the new science of winemaking.

For dinner, settle into one of the lakeside towns and accompany the wine with perch fillets, fries and salad, the lakeside favourite.

The Lavaux wine region of Lake Geneva is world famous for its beauty and has been designated Unesco World Heritage. This remarkable area extends from the east of Lausanne to the town of Villeneuve at the eastern end of the lake.

The extremely steep hillsides to the west turn into slopes to the east, rising from lake level at 300 meters to the summit of the Rocher de Naye mountain at 2042 meters. The hike can be very steep but equally rewarding, and the wine is a wonderful and well-deserved reward.

After leaving Geneva, the wines are mainly white wines made from the Chasselas grape variety. This variety finds its peak in Lavaux, and the regions of Dezaley and Epesses are often considered as good as this variety. The riding by the lake is mostly flat and the main (and busy) road has a space reserved for cyclists. The vineyards, small towns, forests and peaks above the lake are all worth exploring, but keep your legs and lungs in shape or your e-bike battery charged.

The writer Nabakov was chasing butterflies on these mountainsides, and Hemingway was writing, bobsledding and skiing in the mountain town of Les Avants, up on this mountainside. The roads are steep and narrow; they are not for the faint-hearted, but in places suddenly become pastoral. May’s beginning, narcissus flowers cover the meadows so thick it looks like snow. The beauty and variety of the Lavaux region have attracted visitors for centuries, from royal families to Freddy Mercury and Queen.

Pro Tip: It is worth planning a trip to this region for the Montreux Jazz Festival. During your stay, don’t forget to visit the most visited historical monument in Switzerland, the Chillon Castle.

4. The vineyards of Haute Savoie

The southeastern end of Lake Geneva begins in Switzerland and moves into France at Saint Gingolph. The slopes are steep and wooded with little road access and no vines. Cycling along the lake road has little space for the cyclist either, and there is heavy traffic. But the geography opens up as you move through the lakeside town of Evian. Biking above the lake has little traffic and beautiful scenery (but again requires a fit rider or a fully charged battery).

The lakeside city of Thonon-Les Bains marks the beginning of the Haute Savoie vineyard. Driving along the lake is beautiful, although it requires careful attention to traffic. Riding in the foothills and grasslands above the lake to the south is a rolling grassland paradise with possible circle loops involving a sequence of relatively small passes. mark it Castle of Ripaille worth a visit both for its history and for its wine tasting.

The walk along the Lac de Sciez in Geneva is very beautiful, and the traffic is less of a concern. This is the peninsula of Yvoire, a peninsula which is not on the direct route to Geneva, and much of which has cycle paths on the side of the road. You will pass near the medieval city of Yvoire. Ride your bike through the gates and stop for ice cream or a meal.

Yvoire and the nearby town of Nernier are both car-free towns, and are definitely worth a stopover and a visit. This is my home territory; I explore its beauty several times a week. One of my favorite stops after the hike is the Merignan Castle. The wine is organic and the cellar is an absolute example of authenticity, without fuss except in the quality of the wine and the welcome of the winemaker. The château and its terroir have been in the same family for several generations. This level of tradition doesn’t need to be fancy – it can be felt.

Make it a meander

A visit to this great region should be a bit of a meander. It should take as long as you are willing to give.

Avoid the shortest distance between two points and avoid much of the flat road around the lake. Rise above the water; it is embellished in perspective by a top view. The surrounding mountains, in particular this white peak, Mont Blanc, give a wonderful third dimension to the visit. A glass of local wine on one of the many terraces around the lake will be the best way to complete each day. So take the road less travelled, and it will make all the difference.

These 10 Unique Wine Regions Across the U.S. Rival Napa Valley