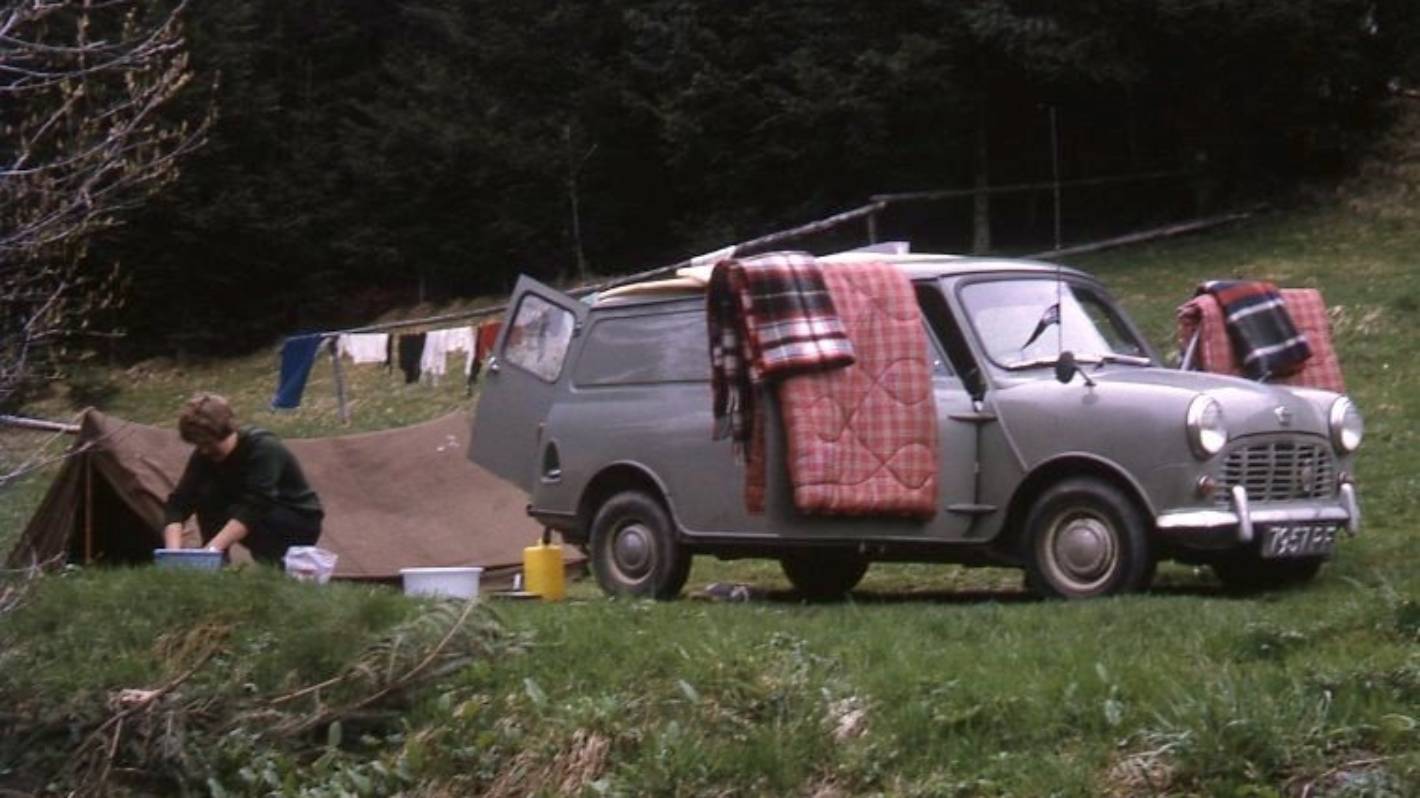 My 1960s European Driving Adventure in a Mini-Van

At the beginning of April 1965, we were ready. We had bought an Austin minivan and honed our driving skills on the narrow lanes of Devon and Cornwall ready to tackle the roads of Europe.

With our limited budgets, we bought sleeping bags and other essentials from Shepherd’s Bush Market in London. Our old army pup tent was bought from other Kiwis. The war he had served in was questionable. Was it a relic of the Boer War? With a few tin cans and a well-used gas burner, a plastic groundsheet tablecloth (it was much cheaper than a real one), we were set.

Belgium was the first country we planned to visit. However, as we were leaving the ferry in France, my friend said to me, “Do you realize that it’s spring in Paris?” It was too good an opportunity to miss. Once we figured out the right direction to go around a roundabout, we were off. And Paris was beautiful in the spring with its streets lined with chestnut trees, buds and flowers everywhere and the sun was starting to have a hint of warm weather ahead.

We found a camp in the Bois de Boulogne and from there we explored the town almost wearing out the leather of our shoes. Tasting good French bread, camembert and cheap red wine made us feel like sophisticated young ladies in this city of love. And we both fell in love, not with dashing Frenchmen or fellow travelers, but with Paris itself.

READ MORE:
* Shrimp cocktails and Austin mini-vans: I did my OE in 1960s London swing
* The joys and excitement of driving in Sicily and Sardinia
* When the borders open: What better way to travel than by river boat?

As young Kiwis living the vibe, strolling along the Left Bank, discovering Montmartre and watching the boats on the Seine was quite exciting for us – and it was free. Museums and galleries could wait.

More adventures were to come. On the way to the Belgian border, we used up the last of our French francs worth of petrol, but since we were short of a few centimes, the attendant siphoned off a tiny amount before letting us go. We arrived in Belgium almost empty, but we made it.

Naturally, we wanted to visit one of the most talked about fountains in Brussels, Mannekin Pis. A legend surrounding this sculpture dates back to the 14th century. According to one story, a businessman’s son had gone missing and his father had sworn to donate a statue of the little boy in the position he was allegedly discovered in.

Later we were taken to an art gallery where we marveled at the huge Rubens paintings on display but the best thing that happened to us was that a friend from New Zealand, a poor student studying in Brussels , brought us a pile of old newspapers. She had realized how cold we were now that he had become damp and cold. This turned out to be a very acceptable gift as our plastic tablecloth alone didn’t provide much insulation.

The morning we were to leave the campground, Min wouldn’t start. After a lot of rain overnight, the spark plugs were wet. Other campers came to our aid and dried them off, showing us what to do in the future. Following their advice we found a large piece of cardboard and tied it behind the grille to protect the plugs and after that we had very little to worry about, although it ruined the look of our precious home away from home.

Then off to Holland. Besides Amsterdam with its canals, bridges and bicycles, we loved the small towns and villages. Keukenhof’s tulip fields were a visual sensation. Each block planted in perfectly straight lines sported different colors. We couldn’t resist buying a garland of spring flowers which, following the example of the local, we strung on Min’s bonnet.

One cold night we arrived at a campsite not far from the Dutch coast. We had stood for a long time watching the sun set beyond the horizon as the waves of the North Sea crashed over the breakwater sending spray high into the air. It had been an exhilarating sight and we had been reluctant to walk away. It was almost dark when we pitched our tent and crawled into our sleeping bags. What a cold night it was.

Imagine how we felt when we stuck our heads out of the tent the next morning to be greeted by an English voice asking if we girls would like a coffee. We were in the trailer next door as fast as our frozen limbs could move. This is how we met a British army lieutenant-colonel, his wife and children.

Our new friends were on leave from their base in neighboring Germany. She was elegant, dressed in a tweed skirt, a cashmere twin-set and pearls. We wondered what she thought of us, disheveled travelers, but over coffee and homemade cookies, a lifelong friendship was forged. We were invited to stay with them when we passed through Germany, which we did a week later, reveling in wonderful hospitality, warm baths, warm beds and delicious food. We didn’t know then how many times we met over the years.

By the time we arrived in the old walled town of Naarden, the weather was getting warmer. We climbed a grassy slope, part of the city walls. We settled in to enjoy our picnic before dozing off in the sun. A little later we were awakened by a bang. Overlooking the paved path between the wall and a canal, two men rode on wheelbarrows loaded with barrels. We hadn’t realized we were dozing above the town wine cellar.

Once they invited us to join them, we were like a gunshot. The men kindly showed us around the cellars built into the wall. The wine was imported from France in barrels to be bottled and labeled in Holland. After tasting a few different wines we were given a half bottle with no label and the label to go with it.

From Holland we made our way to Germany, crossing the borders, Holland, Germany, France and back to Germany collecting stamps in our passports as souvenirs. Once we stopped in front of an official building thinking that we had arrived at another border. It was an appellation control point for controlling the movement of wine between the different areas. The staff seemed amused that we were looking for an official stamp, but they forced us into some weird ladies.

It was late April when we arrived in the picturesque Moselle region. My friend celebrated her 21st birthday in the very pretty town of Cochem. We climbed a hill with a nice view of the valley and the river below. We opened a bottle of French Naarden wine and with Dutch Edam, hearty German bread and a piece of chocolate cake we had a birthday celebration lunch. Unfortunately we were a long way from Lucerne where we had organized our next mail drive and without modern means of communication she had no messages from her family and friends back home.

As compensation, we splashed out in the evening, dressed in our best clothes, but rather crumpled. We dined in a charming inn dating back to 1330. In our ignorance, we think we chose horse for our main course. Anyway, it was a real treat after our meager rations. The staff seemed amused by us Kiwis and after a very convivial evening they came to wave us off.

But now it was time to leave. There were still many more things to see on the continent and more adventures to be had. By then we had been on the road for almost a month, but we hadn’t even reached Switzerland. Our intention had been to spend two months in Europe, but that stretched to four as we continued to meet people who suggested places we need to see and things we need to do.

We loved the European towns and villages with their orange tiled roofs, the peasants working the fields with horse-drawn plows, the landscapes, the food and the strange languages. It seemed tourists were a rare sight in many places and we were as much a novelty to them as they were to us.