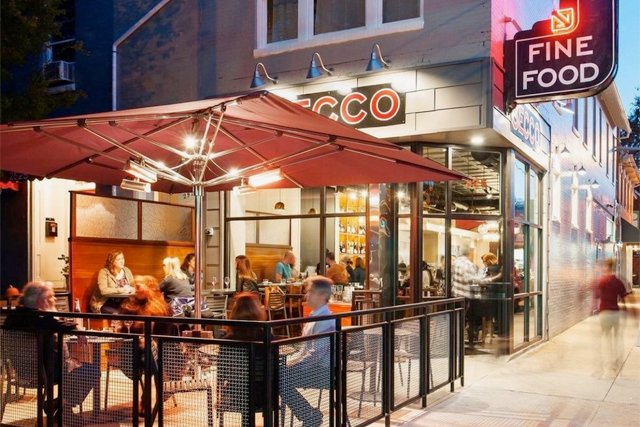 Restaurants have a lot in common with television series. Over the life of a show, viewers become invested in its story and characters. Whether it’s logging in every week or gorging on every episode all at once, fans take the time to enjoy the special moments, slow down and be present, and there’s a certain pride when you can tell they’ve been a fan from the start, listing their favorite episodes as if they were beloved children. And just like cast and crew working towards the end of the line for a production, for restaurateurs, one of the most heartbreaking moments is navigating the finale of a beloved company. Timing is everything, and owners of Secco Wine Bar believe the time has come.

After 12 years of serving Old World vintages and Mediterranean-style plates and guiding oenophiles to the right bottle, Secco, the cozy and transportable Fan restaurant of partners Julia Bataglini and Dave Martin, is closing its doors. April 29 will be the last day of service.

“The idea, the privilege, to close by choice – I’ve always said there are only two ways to leave this industry: by choice or by force – while we are healthy and well placed is uplifting, liberating,” says Battaglini, who firmly believes that drinking good things is a natural right and that gathering around food is the way to salvation.

The duo are equal parts wine experts and gurus, with more than half of their lives devoted to grapes and their accessories. The story of Secco, which means “dry” in Italian, began decades ago with a rambling young Battaglini.

Landing in Richmond after a failed political career and running the wine department at Ellwood Thompson’s – a position practically created for wine lovers – she opened one of the city’s first dedicated wine stores, River City Cellars, at 28.

“My dad said, ‘If you’re going to kill yourself on the job, you might as well work for yourself and do it before you have too much to lose,'” says Battaglini, who operated River City Cellars for 14 years. “I think he thought I would take him out of my system and go get a good stable government job after a year or two.”

In April 2010, she introduced the Secco Wine Bar, located next to River City Cellars in Carytown. Six years later and with rents rising, she was looking for a new home for Secco and was led by a trusted friend of Charlie Diradour, president of Lion’s Paw Development Company, a local real estate group specializing in retail and restaurants. He took her to a building at the corner of Robinson and Stuart streets, the former home of the beer-soaked dive bar Buddy’s.

“She had a vision,” Diradour says of Battaglini. “She put in time, effort, sweat and that’s all the work. She leaves nothing on the table.”

Together, Battaglini and Martin formed a loyal team that would enthusiastically preach the gospel of Old World wines, expertly guide diners, and present service that would “blend into the background” for the next decade. and more.

“Their knowledge of wine and food and their ability to pick a chef like Julie Heins and work with that symphony of cooking and cooking is what made it work,” adds Diradour.

For the past seven years, the kitchen has been led by Heins, who has presented a thoughtful balance between simple, seasonal shared plates and small plates, working closely with Manakintowne Specialty Growers produce suppliers.

“When you can basically forget what’s going on in the back of the house and know that everything is taken care of, that’s an incredibly comforting notion,” says Martin. And as for guiding guests to the perfect meal at Secco, he says, “Close your eyes and point.”

The same notion of “Whatever you choose, you’re in good hands” extends to the restaurant’s wine list. Pioneers in the city’s wine scene — which has seen recent growth with the addition of grape-centric businesses from Jardin to Celladora Wines and delivery services such as RichWine — they’ve built trust with customers, putting showcasing the beauty of a hand-selected bottle paired with a complementary bite. A visit to Secco wasn’t complete without checking out the board, asking about the secret hideout, and savoring an environment that evoked an experience.

“We’ve always stayed in our lane, always educated staff on the product, and maintained a welcoming atmosphere to help people understand the products and why we chose them,” says Martin. “Some of the best memories are about involving staff and supporting our ideas, menus and wine lists. Stoking their interest in what matters to us.”

Helped in that process was Heins, who joined the Secco team after moving to Richmond from the West Coast.

“Secco seemed like the right fit for me,” she says. “You went to Secco to drink something deliciously different. …and I feel truly honored to have been at the helm [in the kitchen] for so long.”

Although Battaglini’s instinctive reaction to all that is heavy in life is to respond with a dose of sarcasm, one detects a sense of excitement and bittersweet sadness for her in this farewell. And while “bitter-sweet” is a cliché, says Bataglini, “it’s also the base for all my favorite cocktails — hello, Negroni, G&T and Manhattan parfait.”

Bataglini, Martin and Secco had an effect on their customers. There was the client who named his dog after the restaurant, the Elbys nod for best wine program of the year and deeper dives into their offerings with classes, including those led by the loyal friend and cheese expert Sara Adduci. They introduced a happy hour that encouraged guests to put their phones in a box and focus on conversation, as well as an annual rosé tour that started at their original location and introduced drinkers to new varieties of wine. tinged with pink.

“I know I beamed the first time a member of my staff said I ruined them for drinking wine somewhere else,” says Battaglini, whose Italian spirit and sass were intrinsically linked to all the aspects of the business.

But in March 2020, along with the rest of the restaurant world, Secco closed due to the pandemic, and the owners spent the next two years oscillating between wanting to survive and wanting to be free.

“Show me a small business owner who hasn’t reassessed direction in his entire life,” says Battaglini. “I had joked for years that my retirement plan was to die behind the bar, but after 2020 it wasn’t funny anymore. But I’m stubborn and I was determined to get out of it first Quitting while you’re ahead is a powerful motivator, our thought was that if we made it through this, we wouldn’t leave broke or broken, but with pride and enough to live on for a well-deserved sabbatical.

And while it was the pandemic that offered a glimpse into the possibilities of life without a restaurant, it was knowing that they could go out and bow out with grace that told them the time was right.

Martin is finally going to restore his 1973 Bronco and Battaglini is going to finish his book, with plenty of wine nearby. They planned to travel “more than two days at a time and see family more than two hours at a time” and go out for dinner on a Saturday night with friends.

The restaurant plans to hold a “garage sale” in mid-May, and its owners also plan to return to wine retailing (more details to come on both efforts).

As with TV shows that make an impact, moments remain, replays replay like memories.

“We are part of a glorious, tenuous and fiercely loyal web of life. The list is long and rich in stories,” Battaglini says of building relationships with diners, vendors and staff. “Seriously, with all the years and all the moments of life that people have shared with us, young and old, and all the completely ridiculous absurdity that I have witnessed, it’s all a fabulous continuum of stories and of hilarity, genuine love and barely suppressed murderous impulses.”

Le Marche – The wine jewel of the Adriatic